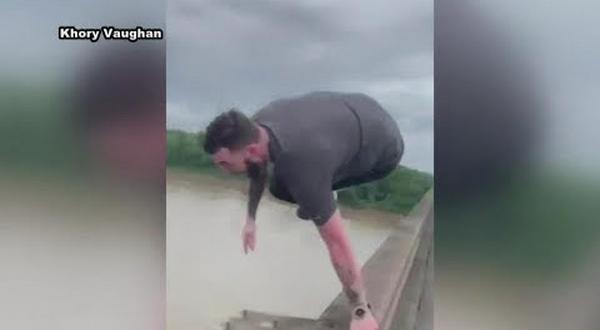 A Louisiana man was cited for criminal mischief and trespassing after he jumped into an alligator-infested river because he was "bored" while sitting in traffic.

26-year-old Jimmy Ivan Jennings sparked an hours-long search and rescue effort after he jumped into the Atchafalaya river from a span bridge that is part of interstate 10. Speaking to New York Daily News, Jennings said he now realizes he's lucky to be alive. "I started going under and almost drowned a few times. I really and truly thought it was the end of my time. I asked God for forgiveness. I forgave everyone in my life. It was hectic," he told the outlet.

Jennings recounted how he had been stuck in a traffic jam for over two hours following a multi-car collision up ahead. His boredom inspired a rather risky plan – he would jump from the Atchafalaya Basin Bridge into the river, swim quickly back to shore, and jump back into his friend's car. "We were bored inside the truck... I looked down at the water, and it didn't seem too far. As soon as my fingertips came off that side, I was like, 'Oh my god, this was the stupidest idea,'" he told the Daily News.

Footage of Jennings plunging into the river went viral, as he was seen taking a running jump before hopping over the barrier with his fingertips and crashing down into the water. He was reportedly forced to remain in the alligator-infested river for almost three hours as the rescue team was delayed.

"I was just high on life. Everything was going my way and I've seen people do it before only I remembered after I jumped that was in movies," he recounted on Facebook. "Once I hit the water, my mouth busted open and I hurt my left arm. I tried to swim to the shore, but the current was too strong. An hour and a half in, I was so tired of swimming. My left arm went out. I turned onto my back and would push with my right hand and my legs whenever I went under. I was praying the entire time."

Jennings somehow managed to swim against the current and crawled back ashore of a small island. He then borrowed a boat in order to reach the mainland, where authorities placed him in handcuffs. "They got me with criminal mischief and some other charges. It was crazy to do what I did. But after the fact, after realizing it was a bad idea, everything else I did was in pure survival mode," the man from Lafayette, Louisiana said, promising to never try something like this in the future. "I don't even want to swim anymore," he said.