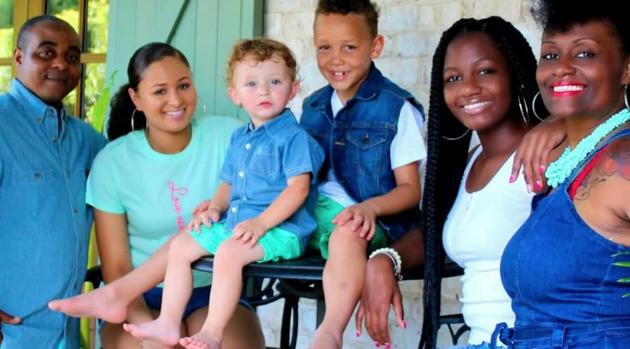 Keia Jones-Baldwin and her husband are fighting against racism because of the white baby they adopted.

Jones-Baldwin, a North Carolina-based therapist told TODAY Parents she was contacted in 2017 by her foster care supervisor and asked "Is there any way you can go to the hospital and do skin-to-skin with a baby?”

When Jones-Baldwin met the child named Princeton she bonded with him right away.

Princeton was born to a drug-addicted mother and only weighed 1-pound at birth. As soon as he was healthy enough to leave NICU, he moved in with the Jones-Baldwin family. Other siblings Zariyah, 15, Karleigh, 16, and Ayden, 8, took to him right away.

Jones-Baldwin says everything has been great at home, but when the family goes out in public questions arise.

“We get a lot of stares,” Jones-Baldwin said. “I’m frequently asked if I’m Princeton’s babysitter. ... I get, 'Why didn't you let him stay with a family of his own race?'"

On two occasions, people have called the police to report a kidnapping.

“We were vacationing in Tennessee and we went to do an old time, Western photo shoot,” Jones-Baldwin told TODAY Parents. “The girl behind the camera would disappear and then come back. Finally she asked, ‘Is that your baby?’ I told her he was. Then she said, ‘I just took picture of this baby with his family two weeks ago.’”

Authorities arrived minutes later. Jones-Baldwin had to produce a letter showing that the baby was in her custody and she had permission to travel with him.

Last month, Jones-Baldwin pulled over outside a man's house because she had a flat tire. "I knocked on his door to explain why I was on his grass," she said. "He called the police and said I stole my car and the baby."