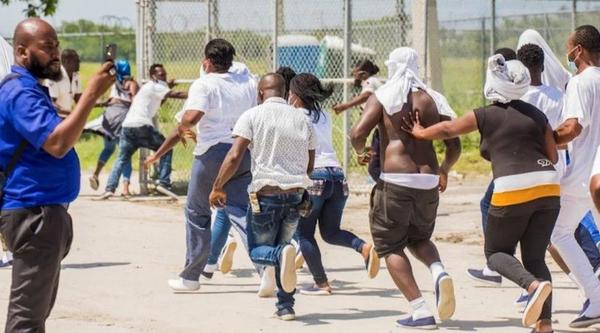 Nearly 10,000 migrants, mainly Haitian, remain in worsening conditions in the impromptu camp that sprang up under a bridge spanning the Rio Grande from the Texas town Del Rio to Mexico's Ciudad Acuna.

In recent days, U.S. authorities have removed at least 4,000 people from the site for processing in detention centers. Some 523 Haitians have been deported to their homeland on four flights, with repatriations set to continue on a regular basis, the U.S. Department of Homeland Security said.

Returnees reacted angrily as they stepped off flights at Port-au-Prince airport after spending thousands of dollars on arduous voyages from the troubled Caribbean nation via South America hoping for a better life in the U.S.

A group of men in white T-shirts rushed back toward the plane after they disembarked in Port-au-Prince, with one man attempting to get back on board.

The migrants broke into a restricted area of the airport as they attempted to recover passports and personal belongings, and ground staff closed the door of the plane before the man could scale the steps back into the cabin.

Tempers ran high, exacerbated by news the Haitian government had accepted the deportations.

"I am angry at the government. We were told in prison that the Haitian government had signed to send us back to Haiti. They are all bad people, these authorities," said Yranese Melidor, 45.

Filippo Grandi, the head of the U.N refugee agency, said U.S. expulsions to such a volatile situation might violate international law and could constitute refoulement, or exposing people seeking shelter to life-threatening situations.

U.S. Senate Majority Leader Chuck Schumer also called out Biden, a fellow Democrat, on Tuesday, saying it "defies common sense" to expel the migrants to Haiti and expressing anger over tactics used by border guards to control the crowds at the camp.