Atlanta Man Gets Into Shootout With Men He Caught Breaking Into His Car. Kills 1, Wounds The Other (Video) 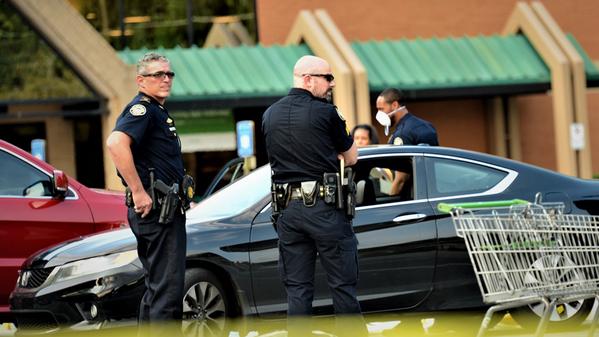 ATLANTA (11 Alive) — Atlanta Police are investigating a deadly shooting in a shopping plaza where they said the victim was defending himself as others attempted to break into his car.

Officers said the shooting happened around 4 p.m. Friday afternoon at the Peachtree Battle Shopping Plaza, in Buckhead. According to police, a man was walking out of the Publix in the plaza when he noticed two men breaking into his car.

At that moment, he decided to confront the men & when the situation escalated, "the victim chose to take his weapon & defend himself against the people that were breaking into the vehicle," according to APD Deputy Chief Timothy Peek.

The first suspect was found dead inside of a car.

Police said the other man ran off toward Peachtree Hills firing a gun. Shots were fired back & forth, with the second suspect being wounded on his wrist.

"Because of the quick response, units were able to get into the area, set up a perimeter, and locate a second person a short distance away," Peek said.

After being located by officers, the second man was transported to the hospital for medical treatment.

"What we do know is the victim's vehicle was entered. We do know some of the victim's property was recovered on the scene but not inside the vehicle where it was originally left, " Peek added.

11Alive SkyTracker flew over the Peachtree Road scene where multiple officers were seen in the parking lot. An ambulance was there as well. People were standing outside one of the stores as officers conducted their investigation.

A few witnesses who spoke to 11Alive said they were in a nearby tavern & ducked under the tables after hearing multiple gunshots.

"It appears to be this was a group of people who decided to come out & commit crimes & unfortunately it led to the death of someone," Peek said.

Investigators are also checking to see if the suspects are connected to any other crimes. The investigation is ongoing.