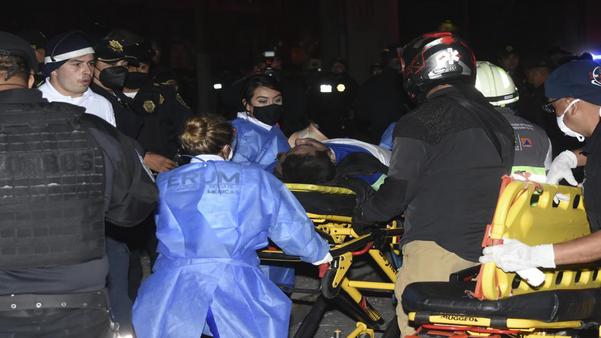 MEXICO CITY (AP) — An elevated section of the Mexico City metro collapsed & sent a subway car plunging toward a busy boulevard late Monday, killing at least 23 people & injuring about 70, city officials said. Rescuers initially searched a car left dangling from the overpass for anyone who might be trapped.

Those efforts were suspended early Tuesday, however, because of safety concerns for those working near the precariously dangling car. A crane was brought in to help shore it up.

“We don’t know if they are alive,” Mayor Claudia Sheinbaum said of the people possibly trapped inside the car following one of the deadliest accidents for the city’s subway system, which is among the busiest in the world.

Earlier Sheinbaum said someone had been pulled alive from a car that was trapped on the road below. She said 49 of the injured were hospitalized, & that seven were in serious condition & undergoing surgery.

“There are unfortunately children among the dead,” Sheinbaum said, without specifying how many.

The overpass was about 16 feet above the road in the borough of Tlahuac, but the train ran above a concrete median strip, which apparently lessened the casualties among motorists on the road below.

“A support beam gave way” just as the train passed over it, Sheinbaum said.