9 Killed, Including 7 Kids, 21 Wounded In Shooting At Russian School. Suspect In Custody (Video) 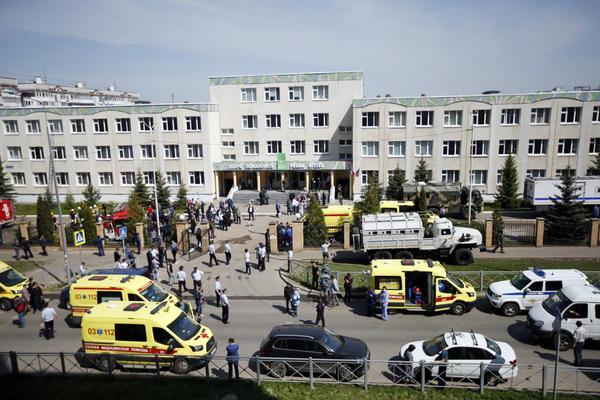 MOSCOW (AP) — A gunman launched an attack on a school in the Russian city of Kazan that left at least nine people dead Tuesday — including seven youngsters & sent students running out of the building as smoke poured from one of the windows.

At least 21 others were hospitalized, six in extremely grave condition, authorities said.

The attacker, identified only as a 19-year-old, was arrested, officials said. They gave no immediate details on a motive.

But Russian media said the gunman was a former student at the school who called himself “a god” on his account on the messaging app Telegram & promised to “kill a large amount of biomass” on the morning of the shooting.

Attacks on schools are rare in Russia, & President Vladimir Putin reacted by ordering the head of the country’s National Guard to revise regulations on the types of weapons allowed for civilian use.

Four boys & three girls, all eighth-graders, died, as well as a teacher & another school employee, said Rustam Minnikhanov, governor of the Tatarstan republic, where Kazan is the capital.

Footage released by Russian media showed students dressed in black and white running out of the building. Another video depicted shattered windows, a stream of smoke coming out of one, and the sound of gunfire. Dozens of ambulances lined up at the entrance.

Russian media said while some students were able to escape, others were trapped inside during the ordeal.

“The terrorist has been arrested, 19 years old. A firearm is registered in his name. Other accomplices haven’t been established. An investigation is underway,” Minnikhanov said.

JUST IN - Mass shooting in a school in Kazan, Russia. At least 13 dead, 12 hospitalized. One suspect detained. Another one holds several people hostage.pic.twitter.com/yiGlmOXlVn