3 Sisters To Stand Trial For Murdering Their Father, Despite Claims Of Sexual & Physical Abuse (Video) 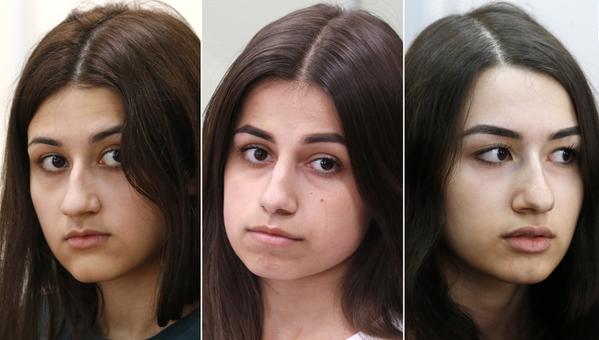 Moscow (CNN) Mikhail Khachaturyan's body was found on a staircase in a Moscow apartment block in July 2018, with dozens of knife wounds to his chest & neck.

A few hours before his death, he had returned from a psychiatric clinic, lined up his 3 daughters to chastise them for the messy apartment and pepper-sprayed their faces, according to investigators and the sisters' lawyers. His eldest daughter Krestina, who has asthma, fainted.

That was the night that the Khachaturyan sisters -- Krestina, 19, Angelina, 18, and Maria, 17 -- decided to kill their father. They attacked him with a hammer, a knife & the same can of pepper spray he had turned on them earlier.

Interrogation transcripts leaked to the press, and verified to CNN by a lawyer for one of the sisters, show that the women tried to inflict wounds on themselves to make it seem as if their father, who was sleeping at the start of the attack, had struck them with a knife first. Then they called the police & an ambulance.

The next day the 3 were arrested & confessed to the killing, saying they had endured years of sexual, physical & emotional abuse from their father.

Last summer the sisters were indicted on charges of premeditated murder, sparking an uproar among activists in Russia, which is grappling with a far-reaching domestic abuse problem.

After a long and tangled pre-trial investigation, their trial opens Friday in a Moscow courtroom. The 2 elder sisters, Krestina & Angelina, will stand trial together. Maria, who was a minor at the time of the killing but indicted after she turned 18, has also been deemed mentally unfit to commit a murder & will be tried separately on a murder charge.

Domestic violence experts, along with the sisters' defense team, say that in the absence of adequate protective mechanisms within law enforcement & the court system, their only choice was to defend themselves or eventually die at their father's hands.

In text conversations obtained from their father's phone and published on Facebook by Liptser, Mikhail Khachaturyan appeared to have threatened to kill them & sexually abuse them & their mother.

"I will beat you up for everything, I will kill you," says one text from April 2018, accusing them of having sexual relations with a male friend. "You are prostitutes & you will die as prostitutes."

The interrogation transcripts also painted a chilling picture of mental, physical and sexual abuse dating at least four years prior to the killing.