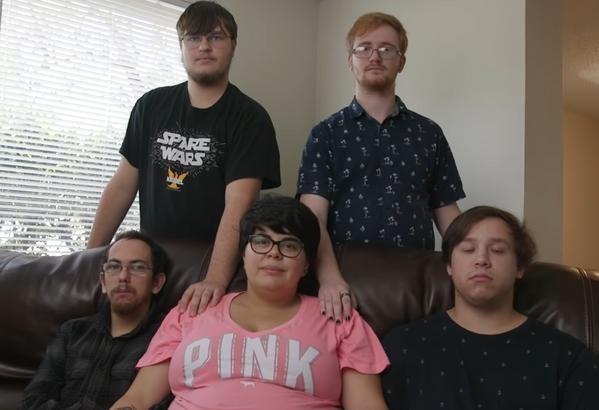 A polyamorous woman in Florida with four partners is pregnant, and says despite sharing her bed with her many lovers, she’s certain of who the father is.

Tory Ojeda, 20, lives with three of her four partners in their Jacksonville, Fla., home. Marc, Travis, Ethan and Christopher take turns spending time with Ojeda, “swapping in and out” of her bed each night, she tells Barcroft Media.

The household’s love story began three years ago when Ojeda met Marc, 18, in high school. Two months later, she opened things up with Travis, 23 — to whom she is now engaged. Later, she brought Ethan, 22, and Christopher, 22, into the fold.

And despite her plans to get married to Travis, Ojeda said he’s not the father of her baby girl, due in February.

But for the soon-to-be family of six, those are just minor details.

It won’t be without its complications, though. The group says they’ve dealt with bouts of jealousy over the years. It was especially hard for Marc and Travis to accept newcomers Ethan and Christopher at first. But Ethan says they talked it out and are all on good terms now.

And there’s the matter of sharing: Ojeda says it gets pretty exhausting having to please four different men under the same roof. She’s actually encouraged her boyfriends to pursue other love interests.