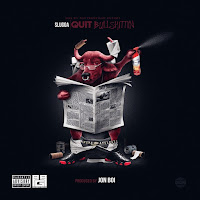 Savannah artist @slugga2gs2ps is celebrating his birthday today and drops off new music #quitbullshittin. This is a single leak off his upcoming EP entitled "Triumph". "Quit Bullshittin" is…

"Wave Wet" is the first single from Rocstar1.11 upcoming project titled "Manifesting My Thoughts", which is set to release in October. The single is available for stream/download below!
Spotify:…
Continue


Betta Den Da No is the first video off Big-Bo's next project "Doubles N Dedication. This video captivates the epitome of not only Pompano but all of Broward County and South Florida flavor. Other music available on apple, iTunes and all other music outlets search Big-Bo "Fingerprints"


Bronx Hip-Hop up and coming Al Jazeere links up with Director Jayonez once again for another timeless classic, "OG' Bobby part 2" this masterpiece is nothing short of a movie, from the cast to the crew and production, this is what Real Hip-Hop Story telling is all about.


Yung Gwapa is an American rapper ,businessman and seasoned musician. Born and raised in the Englewood neighborhood of Chicago ,Illinois. Yung Gwapa’s ability to create hits has proven that he is a force to be reckoned with. He has accumulated over 400K views on YouTube, Spotify and soundcloud. He is a Multi-Talented artist with a style like no…


"Young and Reckless” out now! http://smarturl.it/ynr


INA (ImNotAnime) Drops their latest visual Move Around on Youtube make sure to check the video leave some feedback in the comment section and also make sure to give them a follow on instagram below.


V'Tanna drops his latest visual 90's Baby on worldstar make sure to go show love and leave a comment on the video and also make sure to give him a follow on his social media below.


Eoarn Entertainment Inc drops the new single for their artist Jae Mansa titled “I Swear”. Jae Mansa shows off his catchy flow with witty lyrics. Check out
“I Swear”  be…


Local Las Vegas hip hop and gangsta rapper born and raised in the veg Im from Northside Rollin 60 Crip gang and HTO.I started rappin at age 12 Right now im currently persuing my music career and getting money.Feel free to download my mixtape thanks for the support and god bless.


(VIDEO DIRECTED BY: LONZOE YOUNG)
Houston's own @lonzoeyoung drops off the visual for, "Orphan Lost In Heaven", from his L.I.S.T.E.N. Vol. 5 album. (PLEASE SHARE THIS VIDEO).


Floridas own Dope D drops his latest video Count It Up on Worldstar. This song could be the song of the summer make sure to check it out and leave some feedback. Also make sure to follow him on his social media accounts listed below and add Count It Up to your Spotify playlist and stream it on all other major platforms. …